The Produce Challenge for today is a D’Anjou pear. Luckily, this is something we know a little bit about, so it wasn’t too difficult to find a recipe!

For this, we took the fresh and easy approach – no cooking required!

The best part about a parfait is that you can really use whatever fruit you want. I happened to use strawberries, but if you didn’t want to do any cutting, go with blueberries or raspberries – there is NO bad combination for a breakfast parfait. As far as the granola goes, I used what I had leftover from earlier in the week and yes, it was still amazing!

When purchasing your D’Anjou pears, be sure to Check the Neck – apply just a little pressure with your thumb at the top of the neck of the pear; if it gives a little, it is ripe and ready to eat! 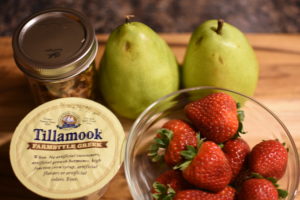 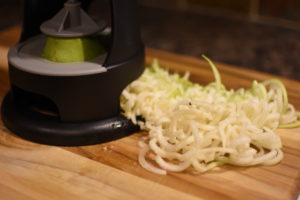 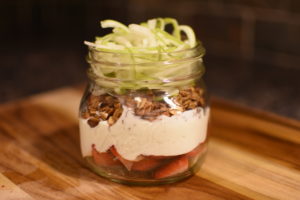 I’ve eaten rutabagas, turnips and beets, but I can’t recall a time that I’ve ever eaten parsnips. So,for today’s Produce Challenge my goal was to find an easy-to-follow recipe that would leave little room for error during preparation. I settled on a roasted fruit and veggie mash! Although an hour seemed a little excessive to me for a side dish, it was nice to have time to prepare other aspects of the meal. It was easy to pop the baking sheet into the oven, set the timer and then go about doing other things.

For this recipe, I chose to use Golden Delicious apples. Their own flavor is very mild, and they tend to take on the flavor of what it is they are being cooked with; I didn’t want the taste of apples to be too overbearing.

What I found to be most interesting about parsnips is that they are much sweeter than I expected. I was anticipating more of a potato flavor, but was pleasantly surprised. For my main course, I paired the mash with a pan-fried pork chop; it was a sweet and savory combination. The next time I make it though, I will likely add a sprinkle of cinnamon and a sprinkle of nutmeg for a little something extra. 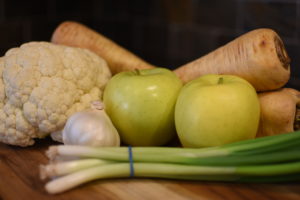 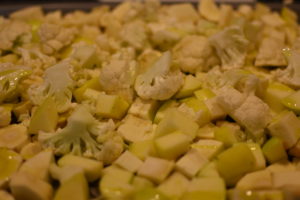 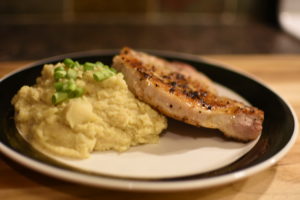 Up until recently, I’d only really eaten sweet potatoes during the holidays; they’ve always been a staple at Grandma’s dinner. However, I have started using them more frequently, so I was really excited when I saw they were on the calendar for February.

I used a combination of sliced and diced for my apples/potatoes/onions. Although the recipe called for wedges of apples, I wanted them mixed in more, so I cut them smaller. Also, if you don’t have one, get yourself a spiralizer! Mine is very basic, but I got it from Pampered Chef and it works GREAT for slicing onions. There were no tears shed and my onions were sliced perfectly thin. You can use it for all sorts of fruits and veggies.

As far as the apples go, I settled on Fuji today. They are very sweet and they pick up the flavors of the spices well. In addition, they’re a juicier apple, so I cut the water out of the recipe; there was no need for added liquid.

I imagine you could serve this as a side dish for dinner, but I ended up serving mine as the main course for breakfast and added some sausage patties on the side. The next I make this however, I will likely add the sausage directly into the skillet; cook the sausage first, then add the veggies in and follow the remainder of the instructions. 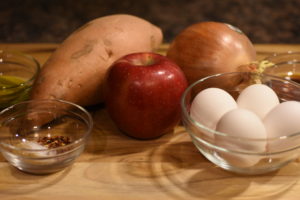 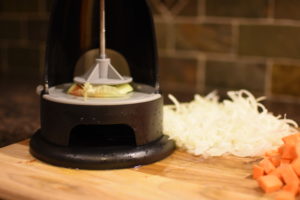 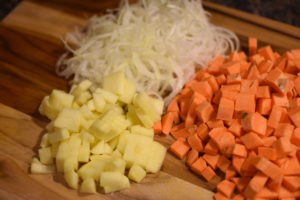 This morning, I woke up to a blistering cold 20 degrees outside; wind blowing, ice on the roads and, albeit very thin, a fresh layer of snow on the ground. Needless to say, I’m longing for hot sunshine and summertime! So, when the Produce Challenge calendar called for watermelon today, you bet I picked something that made it feel like warm weather was near. 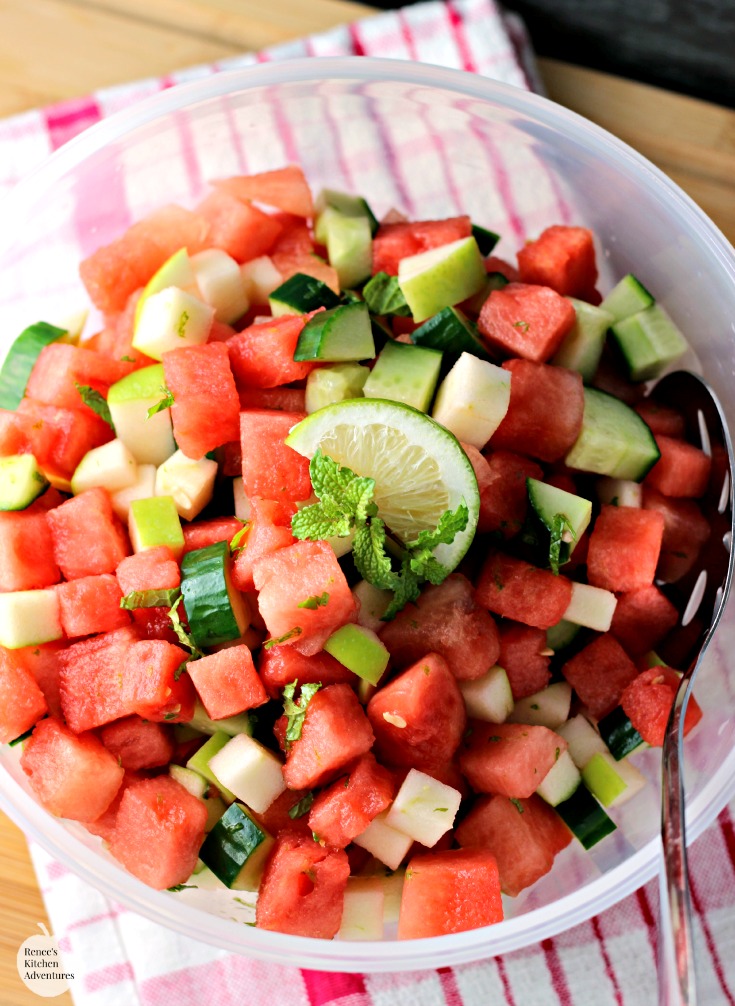 Instructions: Combine all ingredients in large bowl. Cover and refrigerate for about an hour to allow flavors to blend. Gently stir and enjoy!

When I was a kid, my mom always had a fresh fruit salad in the refrigerator for us to snack on whenever we wanted. She never added anything extra; kept it simple, but mixed up which fruits she used each week, and ALWAYS used watermelon as the base. This salad reminds me a lot of when I was a kid, but it has a slightly more sophisticated flavor profile with the addition of mint and lime juice. The adult version of my favorite summer snack! (Although, I do think kids will enjoy it too.)

Prep Time = Accurate – All you have to do is dice and mix! 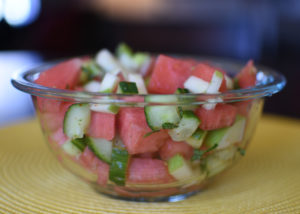 A pinch of salt? I switched that out for a sprinkle of Tajin. It’s all based on preference, but I regularly eat Tajin on my cucumbers, my watermelon and my Granny Smith apples… so it only made sense to use it on all 3 at once!

For this challenge, I decided to go with a breakfast favorite here in the Sage Fruit office, granola. And, it did not disappoint!

Although I regularly see coconuts at my grocery store, I’ve eaten it more times than I can count and I drink coconut water, like leeks, I’d never actually purchased one. So, once again, I had to do a bit of research – How in the world do I open this thing?! I found all the information I needed right  here.

The prep time was on point. But, I found that my granola was not quite as crunchy as I would have like after the 30 minute cook time. So, I turned up the heat on my oven to 350 degrees, and cooked for another 15 minutes, stirring every 5. However, if you decide to turn up the heat, be sure to keep a close eye on it so you don’t end up with a burnt pan. If you don’t want to risk it, but still want extra crunch, keep your temp at 300 and continue checking every 5-7 minutes.

**Note** As you let your baking sheet cool, your granola will crisp up a bit more than what it was when you originally took it out of the oven.

Today, the apples I chose to use were Gala. The main reason for this is because, even though they are very sweet, they are not overly juicy. So, when making a crunchy granola, they will dehydrate quicker and match the overall texture of the other ingredients better.

I can’t recommend this recipe enough – It was a huge hit both at home and in the office. You will not regret making this Apple Pie Granola! 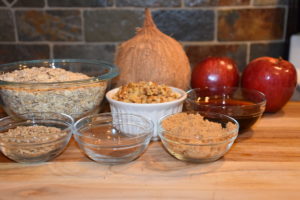 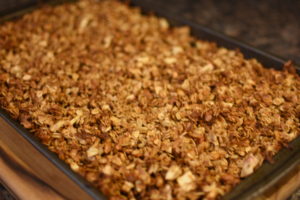 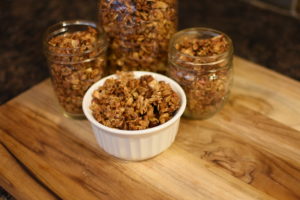 **Full Disclosure: I had NEVER purchased a Leek prior to today’s Challenge.**

Although I’d never bought or cooked with leeks before, I did know what they were and where to find them in the grocery store. So, I made my way over and picked out my 3 small leeks (or at least the smallest ones I could find). Everything else on the shopping list was pretty easy to find, with the exception of rapeseed oil. What I found out, is that generally speaking, I could use Canola Oil in its place – They have their differences, but for this, Canola will work.

Once I got home, it was time to cook! The recipe calls for the leeks to be “trimmed, washed & finely chopped.” For someone who has never cooked with them before, it was a little confusing – I mean, how much do I actually use? Believe it or not, there’s an entire video on The Produce Moms website – Leeks 101: How to Clean, Cut & Cook. This was the most useful tool I used for my recipe – I LOVE when someone shows me exactly what to do!

For my apples, I chose to use Honeycrisp. The Honeycrisp, although very sweet, still has a bit of tartness to it. In addition, it’s a juicy apple which adds to a smooth consistency of the soup. As for the 100g potato, I picked a medium size Russet to use. (100g = .22lb) The way I figured it, even if it was a little bigger than what was called for, it would add some thickness to my soup.

If you aren’t in a hurry, this would be a great Crockpot recipe too. Toss everything in, set on low for a couple hours and make the house smell amazing!

Overall, this soup has GREAT flavor! If you’re not sure on how much spice you can handle, I would recommend using a little less curry powder. I like spice, so I increased the amount I used. Also, I tried the soup as it was coming out of the food processor, and it was good. But, it was even better once I added the yogurt and chives! To add a little texture, you can also top with some sliced almonds. 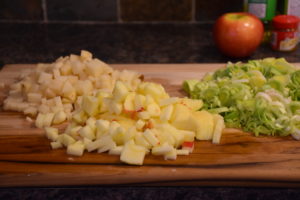 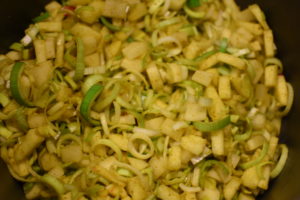 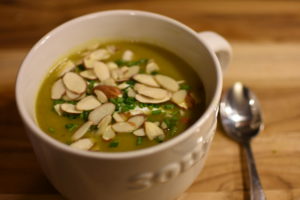 For the past four years, The Produce Moms have been putting together a monthly produce challenge calendar. Each day of the month = a different produce item to try! This week, not only am I taking the Challenge with you, but I’ll be posting the recipes I used too. We’ll also go over how to switch the recipe up a bit to suit your tastes, and whether or not the prep/cook time are accurate.

So, let’s get started! Today’s Produce Challenge is a Radish. I chose a recipe from Blackberry Babe’s website – It’s a radish/apple/cabbage slaw, and it’s EXCELLENT atop shredded chicken or pork tacos. 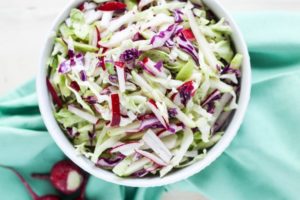 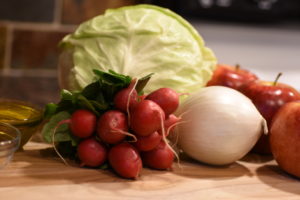 The easiest way to make this slaw would be to purchase pre-shredded cabbage, and (one of my favorites) Duda Fresh’s Radish Ministicks. However, my local grocery store was out of both, so I chopped.

Since I purchased a head of cabbage, instead of pre-shredded, I settled on only 1 color – green. It really doesn’t matter whether you choose green or red; they both will work. AND, if you DO choose to go the pre-shredded route, you can grab bag one of each color! The recipe also called for Granny Smith apples, but I used Jonagold instead for a sweeter flavor. Jonagolds have a nice crunch to them, and they added a little pop of color to my green slaw.

When measuring ‘cups’ of my ingredients, I used the handful method; 1 handful = 1 cup. It’s far easier than measuring everything out, plus, you can never have too much produce!

Even though mine didn’t turn out quite as pretty as Blackberry Babe’s, it was still delicious! Overall, the recipe was simple to make and I appreciated how fresh it was (not all of the added Mayo of a normal slaw). I will absolutely be making it again! 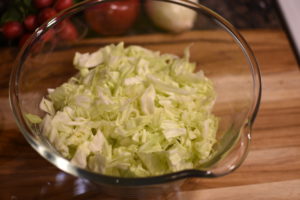 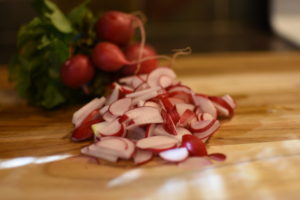 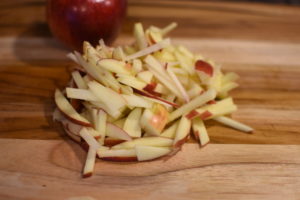 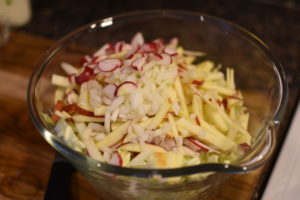 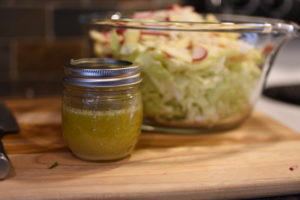 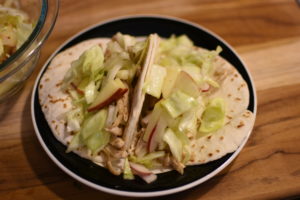 **Side Note** – The shredded chicken was also very easy!