“It feels good to be going back to the Chili Bowl after missing out in 2021,” said Schatz. “I’m looking forward to returning to the seat of Mark Cooper’s car again this year. We had a good run in 2020 and I appreciate the opportunity that he and Derrick Schwabauer are giving me to take another shot at making the A-main on Saturday. The Spike Chassis stable is always strong and I’m proud to be part of their effort.”

“I’m also excited to have the Sage Fruit, Curb, Carquest, Absolute Automation and DKW Transport brands on my car for this year’s Chili Bowl. Chuck Sinks (Sage Fruit), Mike Curb & Cary Agajanian (Curb-Agajanian Racing), Junior Word (Carquest) and Jason Barati (Absolute Automation) have been huge supporters of our program at Tony Stewart/Curb-Agajanian Racing (TSR) and it’s a privilege to have them as partners for a special event like the Chili Bowl.

“Shawn Loken (DKW Transport) has been a long-time supporter of the sport and we’re glad to have him on-board for the Chili Bowl this year as well.”

Schatz made his first Chili Bowl start in 2017 with Clauson-Marshall Racing (CMR), finishing seventh in the first B-main on the final night just one spot short of transferring into the A-main. In 2018, Schatz returned to Tulsa where he was relegated to a seventh-place finish in the second D-main event on Saturday night following a disappointing DNF in his preliminary A-main. In his 2020 Chili Bowl campaign, Schatz drove to an eighth-place finish in his Preliminary night A-main. In Saturday’s finale, he finished ninth in the second B-main Feature to conclude the event.

“After taking a year off from attending the Chili Bowl, we are extremely excited to have our car entered for the 2022 event with the 10-Time World of Outlaws champion Donny Schatz back in the seat,” said Cooper.

“As a brand, we couldn’t be prouder to have him drive the car and as a long-time friend it will be great to have the opportunity to reconnect at the Chili Bowl. It’s been two years since I’ve been able to come to the United States and we’re looking forward to our 2022 Tulsa campaign.”

Chuck Sinks, the president of sales and marketing for Sage Fruit, is also looking to add a Chili Bowl win to the brand’s racing portfolio to kick-off the 2022 season in a big way.

“We’re excited to be back at the Chili Bowl with Donny for 2022. As a long-time partner of Tony Stewart Racing, when an additional opportunity to support Donny arises we’re honored they think of us. He’s a true competitor and his drive is unparalleled. Donny always represents himself, his team and us so well and we’re proud to have a Sage Fruit car running again this year.”

Sage Fruit Company of Yakima, Washington is excited to announce the launch of a new, Earth-friendly pouch bag beginning in June. During the 2021 cherry season, all Sage Fruit bulk, Organic Dark Sweet cherries will be packed in a Bio-Able Solutions bag.

With increased consumer concerns over single-use plastic, as well as a heightened awareness of the availability of more sustainable options, Sage Fruit is actively seeking alternative solutions to traditional packaging. Unfortunately, traditional plastics do not rapidly degrade in our natural setting, and if they are not properly recycled, they build up in landfills, pollute the environment and disrupt our ecosystems.

Key features of this new package include:

“We are very excited to roll out this new bag for our Organic Cherries, “Chuck Sinks, President of Sales and Marketing, stated. “We have been searching for some time for the right solution and when Kaci Komstadius, Social Media and Special Projects Coordinator for Sage Fruit, brought this bag to our attention, we were confident that she had found the answer.  We look forward to getting this new bag to the marketplace this coming cherry season.”

For more information regarding Sage Fruit’s Bio-Able pouch bags or their sustainability initiatives, contact the sales and marketing teams.

There’s no need for last minute gifts, during the holidays or otherwise, to be stressful or complicated. Follow along as Lori from the Produce Moms and Kaci from Sage Fruit demonstrate how to make easy, affordable and homemade gifts that everyone is sure to love.

We’ve created a list of what you’ll need. Gather your ingredients and create these delightful gifts along with us!

Apple harvest is in full swing in the Pacific Northwest! From August through the end of October, we’ll be hard at work picking all of your favorite varieties.

Throughout the summer we’ve experienced mild temperatures. However, the warm days and cool nights have brought on good coloring of the fruit. The weather has also allowed for an earlier harvest than last year by 3-5 days.

Popular varieties like Gala and Honeycrisp are some of the first off the trees, while our newest additions like Smitten and Cosmic Crisp will come later in September.

At Sage Fruit, we specialize in growing both Conventional and Organic apples, which you can find at a store near you!

We work hard on the farm, in the packing facilities, and in sales to deliver “An Exceptional Eating Experience!”

**Note: Cosmic Crisp will not be in stores though, until late November

DYK?: There are over 6500 apple varieties grown throughout the world? Here in the United States, we only grow a handful of them for commercial production.

Although our summer fruit season has come to an end, that doesn’t mean things slow down here in the Northwest. In fact, they’re just getting started!

While cherries kick off our harvest season in June, we continue with apples and pears well into the fall. There are ten commercially grown pears in Washington and Oregon, but our main varieties include: Bartlett, Bosc, Green Anjou and Red Anjou.

Bartletts are among the very first new crop fruit to come off the tree, with their harvest beginning in early August. Like apples, the different pear varieties are harvested at different times.

Farming is a year-round job and we’re lucky to have the best growers out there!

DYK?: Pears are picked when they are fully mature, but not yet ripe. They are one of the only fruits to ripen off the tree!

To ripen pears, allow them to sit on your counter top at room temperature for 1-3 days. Check the Neck! to see if they are ready to eat – apply gentle pressure to the neck of the pear, and if it gives slightly, it is juicy and sweet and ready to eat!

Why are pears considered a Winter fruit? Find out here.

It’s long been debated as to whether or not pineapple (fruit in general) belongs on pizza. Well, we’re here to add to that great debate, BUT instead of pineapple, we’re adding pears! Pears can be grilled or cooked, they pair well with cheese, and let’s be honest… Everything goes with bread! Hence why we’ve added them to one of our favorite foods.

Now it’s time pineapples step aside for pears to triumph as the ultimate fruit to use as a pizza topping!

We highly recommend giving one of the delicious recipes below a try.

While you’re at it, enter for your chance to win a Gozney Roccbox mobile pizza oven. Our friends over at USA Pears are hosting a #PearPizza takeover from September 12, 2019-October 16, 2019.

Welcome to the beautiful Pacific Northwest, where tree fruit is our specialty!

Get to know Sage Fruit Company as we take you through the process of growing, packing and shipping the world’s best apples, pears, cherries, peaches, apricots & nectarines. 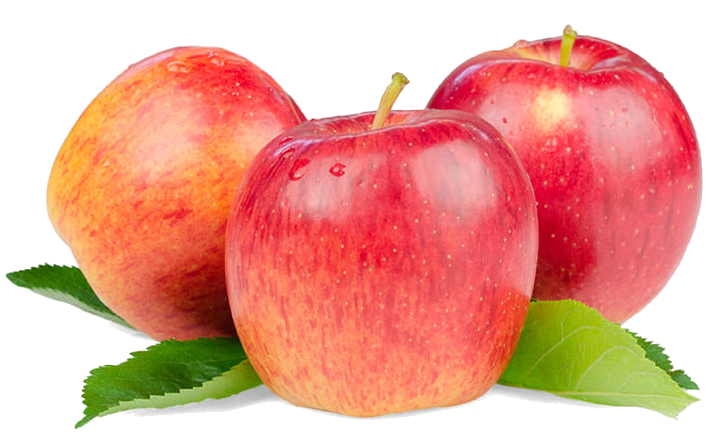 Have you tried a Smitten? Once bitten, you’ll be forever Smitten!

The search for the next great eating apple began in New Zealand in 2005. By 2011, Smitten was introduced to the United States courtesy of Pegasus Premier Fruit. Today, only a few apple shippers across the country are responsible for the growing, packing and distributing of this unique variety within the domestic market – which includes Sage Fruit!

Smitten is a cross pollination of Gala, Braeburn, Fiesta and Falstaff.

Smitten has a perfectly well-balanced flavor. It is sweet, with a hint of tartness and complex aromatics.

Curious yet? Head to your local grocer and pick some up! Let us know what you think. Can’t find them? Ask your produce manager.

We’re also giving you an opportunity to enter for a chance to win a sample case of Smitten apples + $100 Amazon Gift Card! Click here for more details. 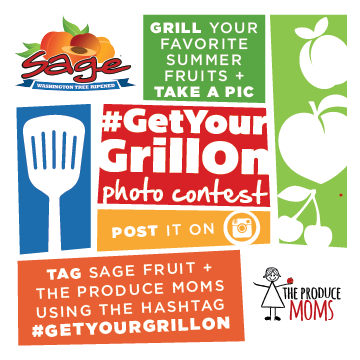 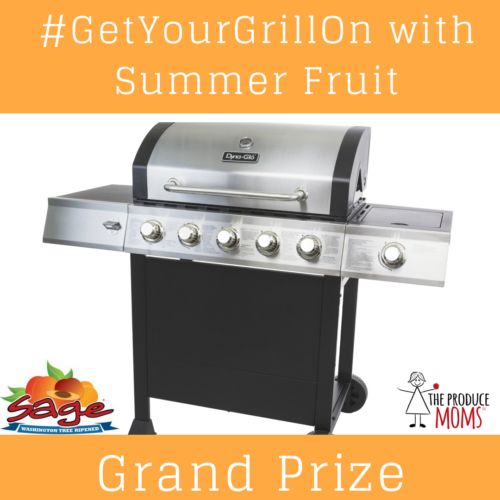 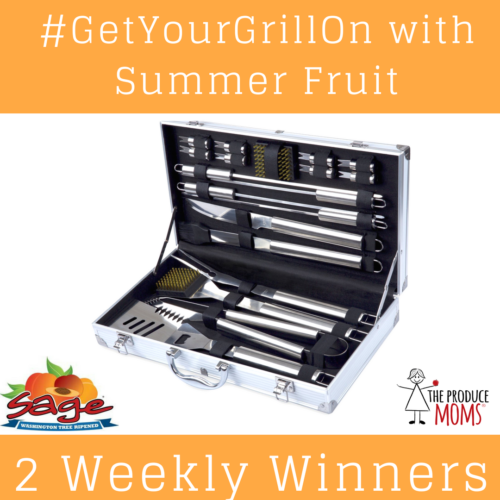 Summer is the perfect time for family cookouts, so #GetYourGrillOn with Summer Fruit! We’re hosting our first ever Instagram contest with The Produce Moms and we’re giving you a chance to win a new grill!

Grilling peaches for dessert? We want to see it! How about fruit kabobs? Snap those pics! Head on over to our Instagram now and enter for a chance to WIN…1 Grand Prize Winner + 2 Weekly Winners!

Open to US only…winner will be announced on Instagram on Monday, August 27th.

This past spring, we welcomed a new growing and packing facility to the Sage Fruit Family. With this new warehouse (Vanguard Pride Packing), we added more apples and cherries to our inventory….but, we also added A LOT of Northwest grown stone fruit. So, as much as we enjoyed the summer before, we now have three more reasons to love it – apricots, peaches & nectarines! While our apricot season is already over, we are just getting started with peaches and nectarines.

What is a stone fruit?

Let’s first establish what a stone fruit is. Very simply, it is a fruit that contains a large “stone” (or pit) inside of it. Many people think the stone itself is the seed, however, the stone actually protects the seed, which is found inside of it. (Cherries are also considered stone fruit.)

Beginning this summer, we have both Conventional and Organic peaches and nectarines available. ALL of our peaches and nectarines are tree-ripened for the sweetest flavor! You might be asking yourself, “What does tree-ripened even mean?” Well, we allow the fruit to remain on the tree as long as possible in order for it to have the opportunity to reach its highest sugar content.  We pride ourselves on delivery an exceptional eating experience, and know that the tree-ripening process in the most important aspect of our stone fruit growing. While we pick the fruit when it is still firm, we do not pick it when it’s green. So, you can eat it as soon as you get it home, or let it sit on the counter to soften up a bit.

Peaches have a delicate aroma, and a skin that is velvety.  Depending on the pit, peaches are classified as either freestone or semi-cling varieties. A freestone peach can have its center stone easily removed from the flesh because it is not attached. In contrast, the center stone of a semi-cling peach is attached to the flesh. Freestone peaches are much more suitable for canning than semi-cling peaches, however there is no noticeable difference in flavor, and both are excellent for eating fresh!

Additionally, the flesh of peaches can be different – we grow both white flesh and yellow flesh varieties.

Nectarines and peaches are closely related. However, they do have one visible difference, which is their skin. Peaches are velvety, whereas nectarines are smooth. Their skin is brightly colored gold with hues of ruby and pink throughout. All nectarine varieties are semi-cling.

Like peaches, nectarines can either be yellow flesh or white flesh. The flavor profile of each, also follows similarly to peaches.

Need help picking out the perfect fruit? Use the guide below! 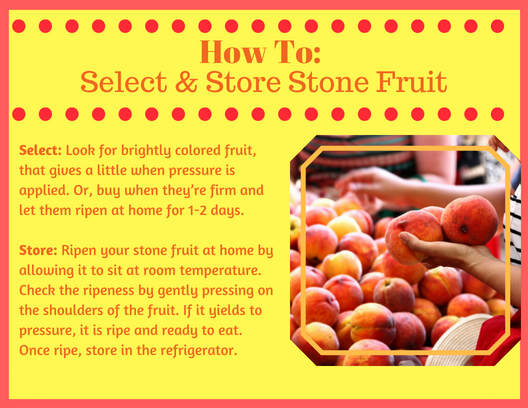